Songs of the Big Band Era 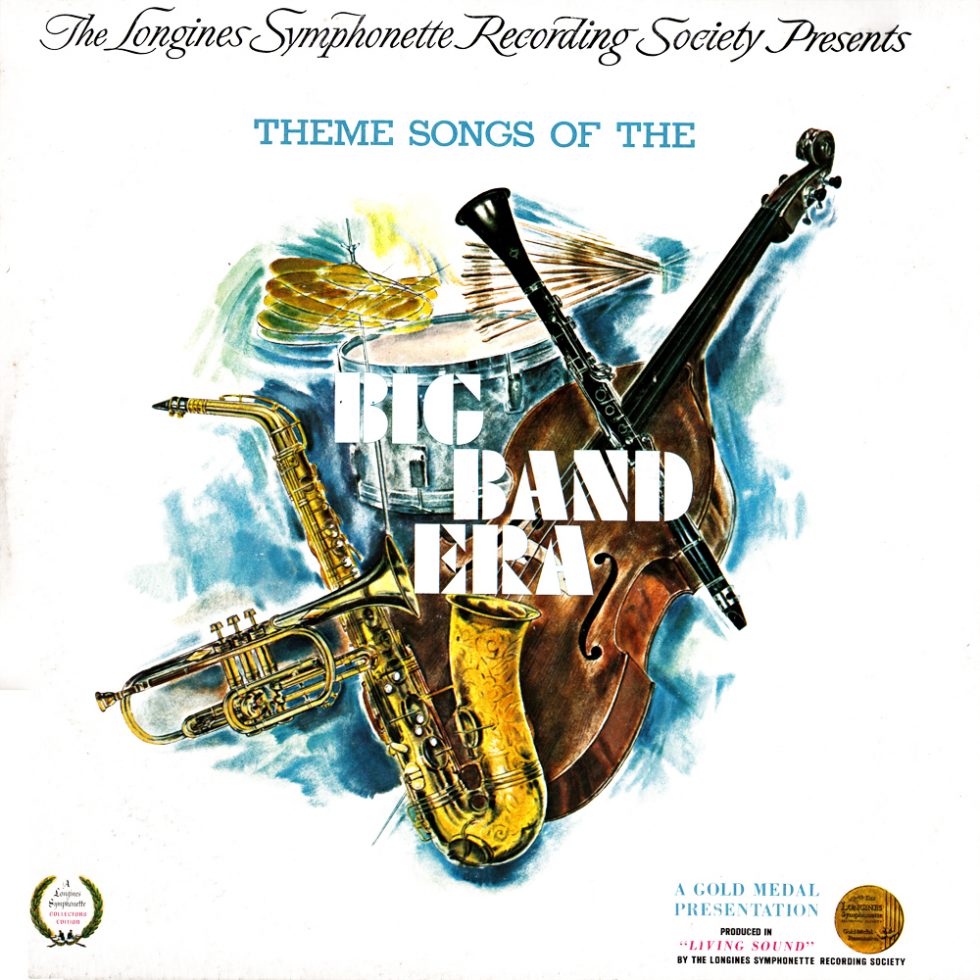 The danceable, swingable music of the 1930’s burst upon the American scene like a rocket showering the decade with the sparkle of big musical stars to spangle the musical firmament. Tommy Dorsey, Fred Waring, Glenn Miller, Guy Lombardoâsuperb musicians all, created rhythmic innovations with strong orchestral voicings. Simple, swinging melodies emerged and an enraptured America welcomes the new music you could dance to, and sing with … the big new sound that expressed a new and rollicking musical spiritâthe sound of the Big Band Era.

The Big Bands flooded the country with enthusiastic music … music with a firm, swinging beat… and young Americans emerging from the gloom of the depression years flocked into the gigahtic ballrooms of Chicago, Kansas City and New York and broadcasts from The Aragon and the Trianon, Meadowbrook and the Glen Island Casino filled the airways with song and the halls with syncopated dancing feet. Where were you when you first heard Tommy Dorsey’s I’M GETTING SENTIMENTAL OVER YOU, Vaughn Monroe’s RACING WITH THE MOON or that famous signature sign off of Guy Lombardo’s AULD LANG SYNE?

In 1937 Benny Goodman, King of Swing, opened at New York’s Paramount Theatre for a 2 week engagament. Teen-age “jitterbugs” danced in the aisles and 10 mounted patrolmen kept order outside. But, in a few short years, when crooner Frank Sinatra opened at the same theatre, a riot call was issued to handle the exuberant bobbysoxers and more than 440 patrolmen plus 20 patrol cars responded to control the enthusiastic youngsters.

Remember those carefree days … young and old alike responding to new, sophisticated rhythms blasting from bandstands … radios … garish juke boxes . . . sweeping us all up with a glorious feeling that Happy Days were around to stay for a long, long time. The music was light, gay, happy played by talented musicians who put heart and soul into new orchestral phrasings . . . and the strong voices of the brasses carried the sweet melodies far and high, ringing clearly over driving rhythm sections.

THE BIG BAND theme songs were heard over the airlanes … and soon blended imperceptibly into everyone’s daily life. Mellifluous voiced announcers introduced Wayne King as “The Waltz King” and the strains of THE WALTZ YOU SAVED FOR ME drifted from a thousand open windows. The trumpet came into its own with Harry James’ unforgettable rendition of CIRIBIRIBINâdo you remember dancing down the aisles to that one?

People danced all night to the music of another trumpet master, Louis Armstrong, and his stirring solo section in WHEN IT’S SLEEPY TIME DOWN SOUTH . . . and, they still queue up to hear Louis Armstrong more than two decades later only now the lines form in Stockholm and Singapore, too. While many instrument-playing musicians “fronted” for their bandsâleading while playingâsome of the greatest bands were led by singers. Remember masters like Vaughn Monroe whose bewitching baritone, fills memory lane with that famous theme song RACING WITH THE MOON.

You can relive those memorable years … that strenuous decade when America pulled itself up from the depths of the depression to a shining prosperityâdancing all the way. Remember the energetic “lindy-hop”? or “trucking”? … or perhaps your memory moments are recreated in the fox-trot when you danced those prom nights away under a thousand small town skies dreaming to the sweet music of Freddy Martin. Now, you can lean back in your own home surroundings and give full vent to sentimental overtones when the unforgettable Glenn Miller theme song MOONLIGHT SONATA drenches the room, filling your personal memory album with memories of those lyrical days just a short pause in time ago … the days of THE BIG BAND ERA.

I am very flattered that you have included me in your forthcoming album saluting “The Big Band Era.” Wherever I go, people continually ask me “When are the big bands coming back?”

TOMMY DORSEY
Born in Mahoney Plains, Penna. 1905. World famous Trombonist who met his death at the early age of 51.

The Longines Symphonette Society provides the world’s most beautiful music at the lowest-possible cost!

Truly beautiful music requires special arrangements, unusually fine recording techniques, superlative production if it is to fill you with the “heart” and emotion that is the reward of sweeping melody.

The Longines Symphonette “Gold Medal” records are produced to the highest standards of quality . . . utilizing only the finest, purest grades of virgin vinyl materials. “Living Sound,” the exclusive Longines Symphonette recording technique, requires the finest, widest possible range amplifiers and multiple track tape recorders to capture the meaning and beauty of music. The arrangements are carefully prepared to assure you of smooth, broad, melodic themes … never a jarring cacaphony. When The Longines Symphonette hallmark of quality appears on a label, you know you will embark upon a listening adventure in fidelity and virtuoso performance. And you know that your satisfaction is guaranteed . . . that each recording is guaranteed for three years no matter how often you play it. * The Longines Symphonette Society is an educational service of The Longines-Wittnauer Watch Company, makers of Longines, The World’s Most Honored Watch.