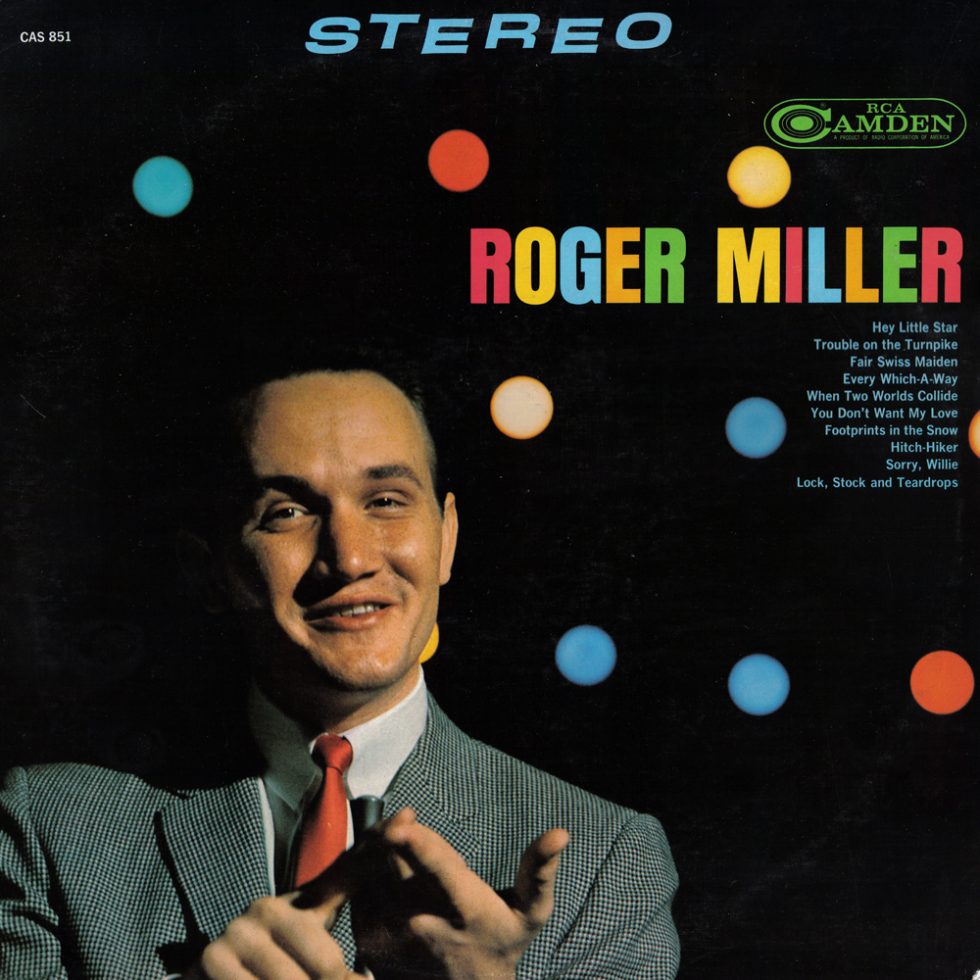 That dashing young man with the fine voice and the keen sense of humor, Roger Miller, offers you here a choice sampling of the type of song styling that has soared him to sensational popularity. This RCA Camden album is made up of a selected group of early Roger Miller performances. These favorites are being released in album form for the first time, and Roger’s enthusiastic fans will be delighted with this entertaining collection.

Now, just where did this big singing and composing talent come from? Well, where do they grow things big, partner? Roger Dean Miller was born in Fort Worth, Texas. He did not really grow very big there, however, since he moved to Oklahoma at an early age.It was here, according to legend, that he startled his teacher with a touching rendition of his first composition, There’s a Picture on a Wall, It’s the Fairest of Them All, My Mother. Roger was five years old at the time. He was already working hard. He would rise at dawn, do the chores for a couple of hours, and then hike three miles to school.

Roger earned the price of his first guitar by picking cotton. He began to enter amateur contests, and he plucked and sang happily along, sometimes imitating his idol, the great Hank Williams. But life is not all music, and eventually Roger Miller found himself in the United States Army. Although U. S. Army sergeants are not particularly noted for their love of music, Roger miraculously found himself in the same company as a sergeant who was a brother of Jethro Burnsâof the famous team of Homer & Jethro. Roger and the sergeant made frequent trips to Nashville, goal of many a young singer.

When Roger finished his military service, he headed straight for Nashville, where he had an RCA Victor audition at which everything went wrong! To begin with, Roger showed up without his guitar. RCA Victor’s obliging Chet Atkins lent him one. Roger nervously began to sing in one key and play the guitar in another. Things went from bad to worse, and finally the young singer sadly returned the guitar and left the studio.

Years later, with the same Chet Atkins not only in attendance but as his producer, Roger recorded his famous You Don’t Want My Love, Every Which-A-Way, When Tivo Worlds Collide, Fair Swiss Maiden and other of his originals included in this collectionâtunes that launched the Roger Miller musical career.

So, today, Roger Miller can afford to chuckle at early errors and mishaps. Today he’s the singing star of Dang Me and Chug-A-Lug and heaps more. Today the selections here, dating back only as far as 1960, are “early” Roger Miller and in-demand performances by one of the big-name recording personalities.

HEY LITTLE STAR
WHEN TWO WORLDS COLLIDE
TROUBLE ON THE TURNPIKE
LOCK, STOCK AND TEARDROPS
FOOTPRINTS IN THE SNOW