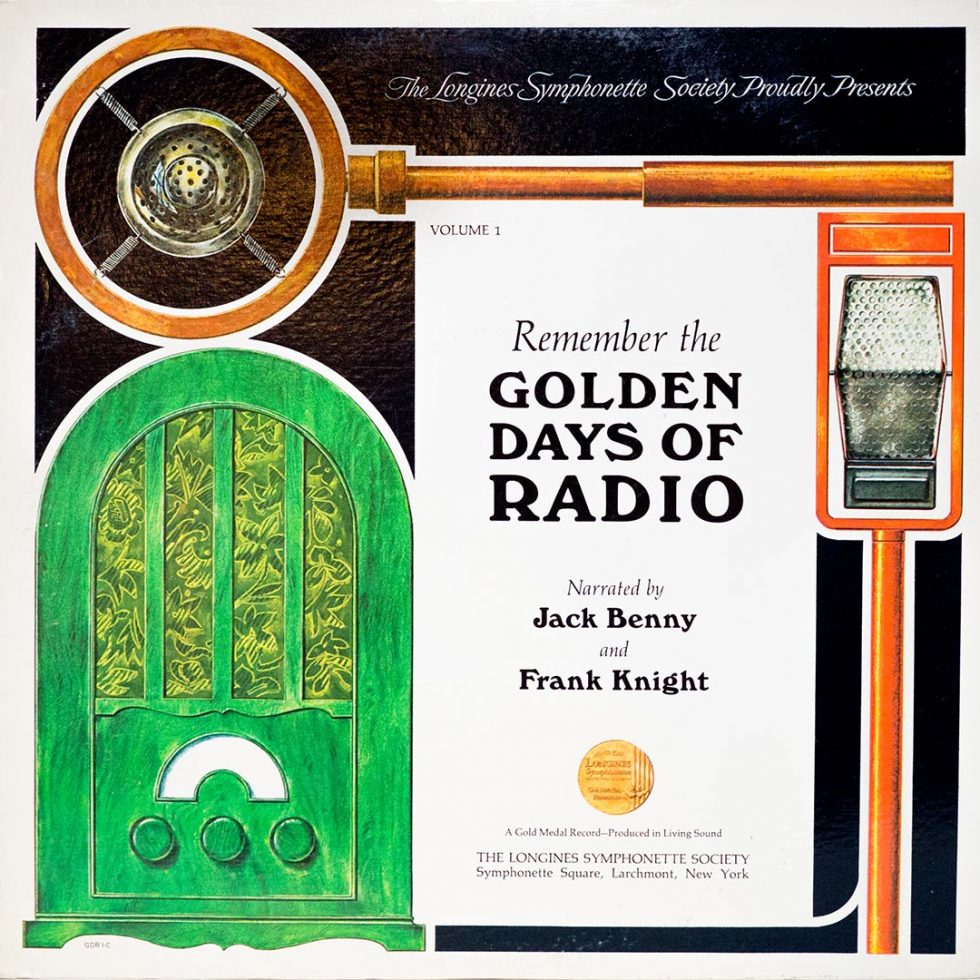 Radio… When You and I Were Young

We all took it pretty much for granted. Once the novelty of the crystal set had passed, radio moved out of its infancy and became such a comfortable and accepted part of our lives! We hardly gave a thought to that little carved wooden steeple on the end table as a harbinger of the space-age electronics to come. We listened, from morning till night, and devoured each word, each note of song. We lost ourselves in adventures, both real and imaginary, that were the radio’s daily offering, but we were unaware of the fantastic growth of the medium that was flourishing in our livingrooms and kitchens.
The yellow dial cast a sleepy glow as housewives dusted their furniture and wiped away a tear for Helen Trent. Heat emanated from the mahogany crown as the whole family took a tour of “Allen’s Alley. “The household radio withstood regular eruptions from Fibber McGee’s closet, and the explosive laughter induced by Bob Hope, George Burns and Grade Allen. We loved it.But we never dreamed how much we would miss it when it was gone.
Radio has grown up… rather nicely… and a lot of exciting things happen on television. But oh, to settle down in an overstuffed chair, or stretch out on the rug (the way you did when you were a kid) close tothe tweedy- 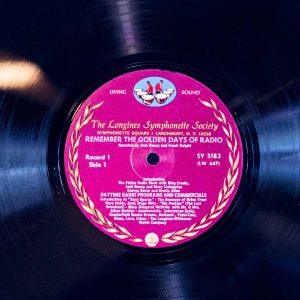 faced speaker of the console and listen to Lum and Abner … liberally spiced with Rinso, Lava, Pepsi-Cola and other memorable commercials.
Well, now you can. You might even be. able to give your own children some idea of what it was like to be young in the days before the 21-inch screen.
REMEMBER THE GOLDEN DAYS OF RADIO, VOLUME I will re-introduce you to all these delights.. .with an added advantage, never before possible: you can now hear each of these original programs again and again! With the closing theme of your favorite soap-opera you can simply move the arm of your phonograph back and relive every breathless moment. Truly, modern science is wonderful… the magic of recording can now bring you closer to your most admired heroes and heroines. And you thought the Golden Days of Radio were lost forever!
The Longines Symphonette Society deserves special accolades for making this amazing two-volume edition available to eager radiophiles. An honored name in radio for many years, the Longines Symphonette now adds to its proud heritage this virtual encyclopedia of radio’s greatest moments… and happily offers it to the people who will appreciate it most: you who were there.

We Left No Stones Unturned

Only the Longines Symphonette could have brought together, in one brilliant collection, all these sentimental memories of a bygone era. REMEMBER THE GOLDEN DAYS OF RADIO is like a diary… for as you listen to these original broadcasts (just as they came over your own radio) you’ll find yourself remembering people and places you haven’t recalled in years. The comedy is brighter than ever… the drama is just as suspenseful. And the news broadcasts are the ones that altered the course of human destiny.
They told us it was impossible to locate the original broadcasts of the famous radio shows. In most cases, the only remaining material was stored away in dusty warehouses, on big, old-fashioned 16″ acetate discs that were fragile with age. Many of them could not even be played! But with the cooperation of private collectors, all three major radio networks, more than 100 interested men and women, the impossible was done. 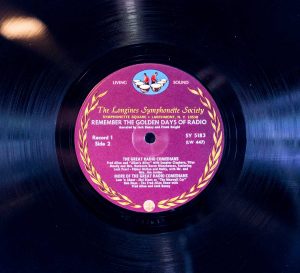 Once the material was found, our legal staff and researchers hadto dig through hies and archives to find contracts and copyrights. It was ah international search—Portland Hoffa (the widow of Fred Allen) was located in Hong Kong, for example. It was a painstaking job that we do not believe can ever be duplicated. REMEMBER THE GOLDEN DAYS OF RADIO could not have been accomplished without the wholehearted assistance of countless members of the entertainment industry who earnestly desired to see our dream of such a collection of recorded radio excerpts become a reality.
But our work had only just begun. The next task was an artful restoration of each recording to remove hiss, static, and pops to bring them up to the most modern electronic standards. Our staff of technicians used every means known to science… and invented a few new ones… to make this collection vibrant and flawless.
Then followed a final sifting and programming of the material… only the selections which had responded fully to the refurbishing program were used… and here, at last, is the cream of the crop!