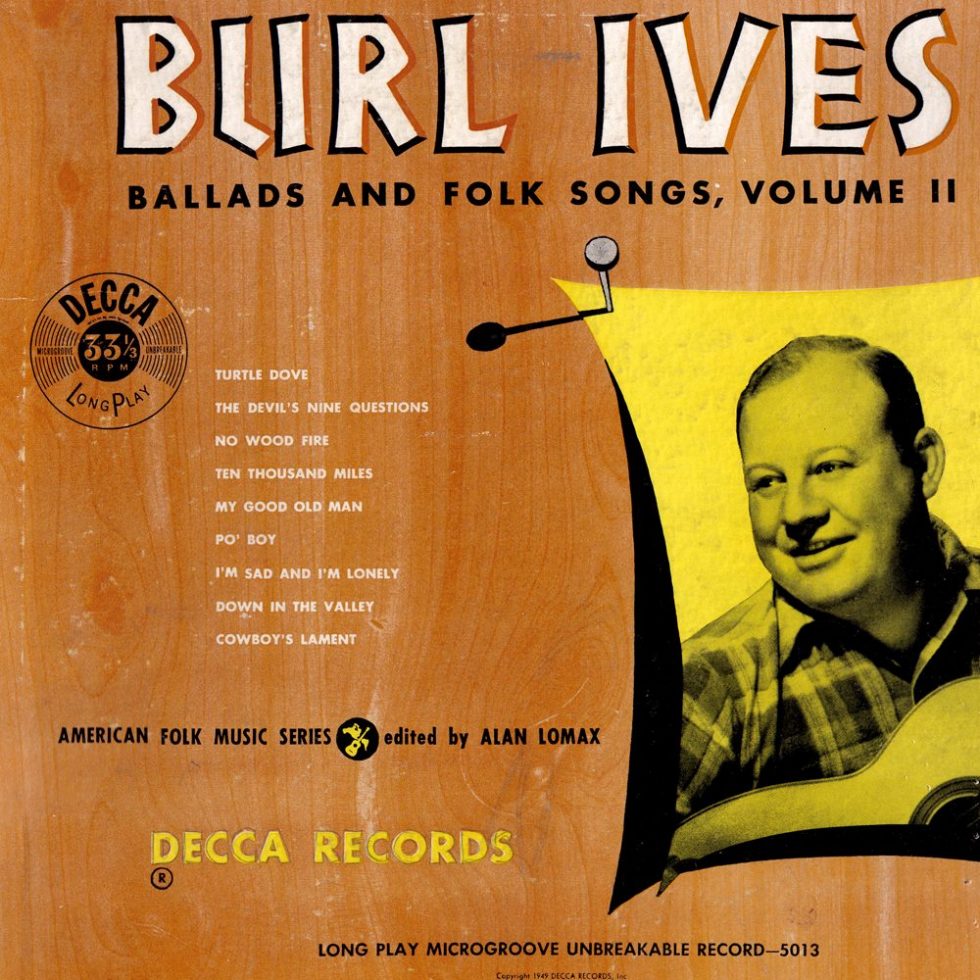 VOCAL WITH GUITAR AMERICAN FOLK MUSIC SERIES
Edited by Alan Lomax
The man who has written most frankly about Burl Ives is Burl Ives himself. The fellow whom Carl Sandburg has nominated as “the best ballad singer of them all”‘ has told his own story in “Wayfaring Stranger,” a book which is both a revealing autobiography and a document. Here is his earliest recollection, as Burl tells it: “There was a lonely lane leading up to the house on the hill. On each side of the lane was a zig-zag rail fence. My first inkling of being alive ivas in a corner of one angle of this rail fence. Someone had propped me against it. There I heard a noise. It became clearer and more distinct, a symphony of a million frogs played music and it fell upon my ear and it ivas pleasant. It was just evening, dusky dark, and two little boys came from the corn field and had made cornstalk fiddles. They had put resin on the bows and were fiddling on these little instruments and my older brother, whose name was Arty, said, ‘Here we have brought you one too.’ And I was handed a cornstalk fiddle and cornstalk bow, and he took my hands and showed me how to fiddle on it. So we all three fiddled and we laughed gaily and it was fine music that we and the frogs did make . . .”

His full baptismal name is Burl Icle Ivanhoe Ives. He comes from Scotch-Irish stock and was born in a town in southern Illinois, so small that it has since disappeared completely. He likes to travel. His itching foot and his throbbing guitar have taken him hoboing all over the United States.

Burl started young. He made his first quarter at the age of four singing the old English ballad, Fair Ellendor and the Brown Girl. He sang at revivals, church sociables and meetings of the Epworth League. He played his five string banjo for square dances. He performed in a jazz band. And all through school he kept slipping out with his guitar and using it for a railroad ticket to one place and another. “Just wanted to see what the country looked like,” he says. “There were good songs all along the road.” Today Burl is just about the best-known figure in American folk music. He’s appeared in Broadway shows like “Sing Out Sweet Land” . . . he’s starred in motion pictures like “So Dear To My Heart” and “Station West” . . . he’s done radio programs with Bing Crosby and others . . . he’s given dozens of sell-out concert recitals. These, together with his delightful Decca records, have made Burl and his songs familiar to millions.

He’s a big guy and has a punch like a mule kicking. His smile fills a room and his laugh shakes the chandeliers. But he’s quiet, too, and he can listen. He listened to his mother and his father, who were both singers. He listened to people singing all over the country. And his song-bag is full. He can sing all night and never sing the same song twice. And every song is better than the last one.